So after getting to bed midnightish, we were all awake again at 4!

1 bathroom, 6 Girls ! But we made it out the door and headed back down the cobblestone road for brekkie. We had all our cases with us as we were checking out and catching the ferry to Skopelos later that morning, so we sounded like an army tromping down the cobbles.

We found a great cafe … 7Sins 😂 where a lovely young waiter herded our suitcases into a tidy row and found us a table. There we had our first Greek Coffee and loved it so much, it was the first of many. Breakfast was a split with half the team staying on the local tack and choosing fruit, Greek yoghurt and nuts with honey. The opposition chose a vegetarian omelette ….. both got Michelin Stars from our judges. 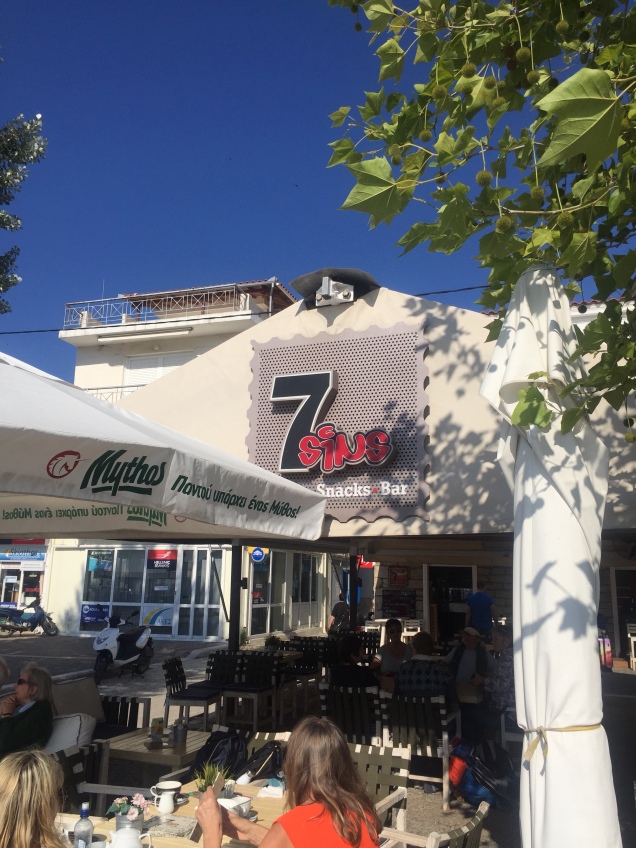 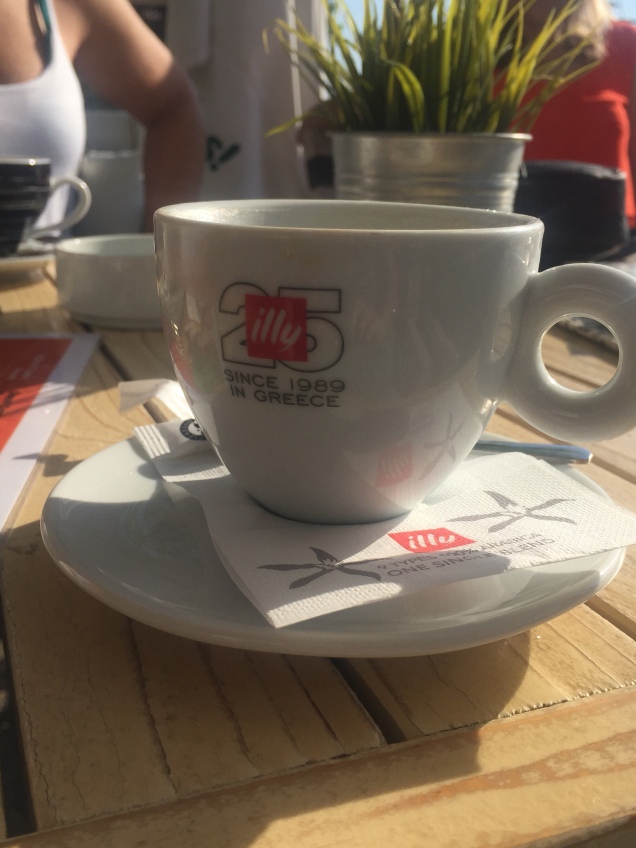 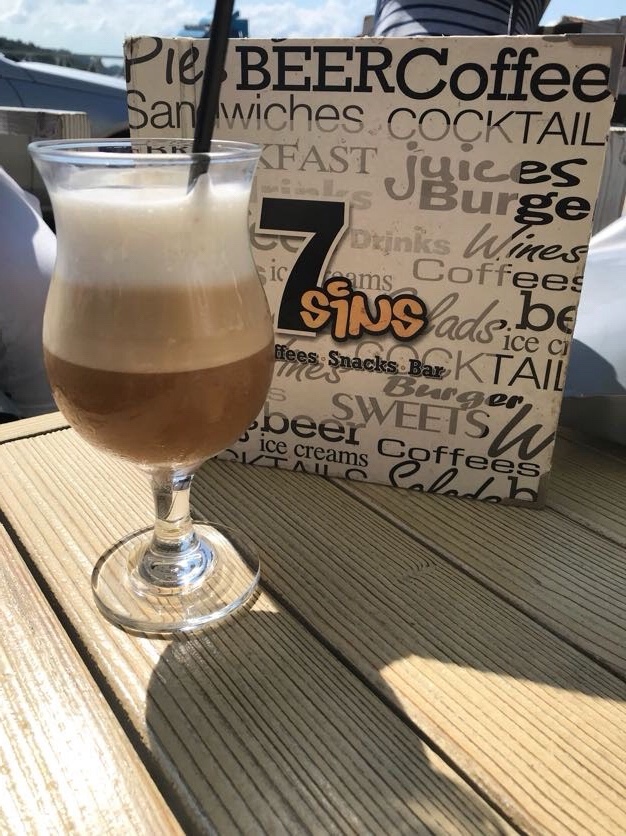 We were able to leave our suitcases safely coralled and wandered through some of the alleyways we had seen in the dark. It was all so pretty, and girls being girls, we managed to shop a little as well. 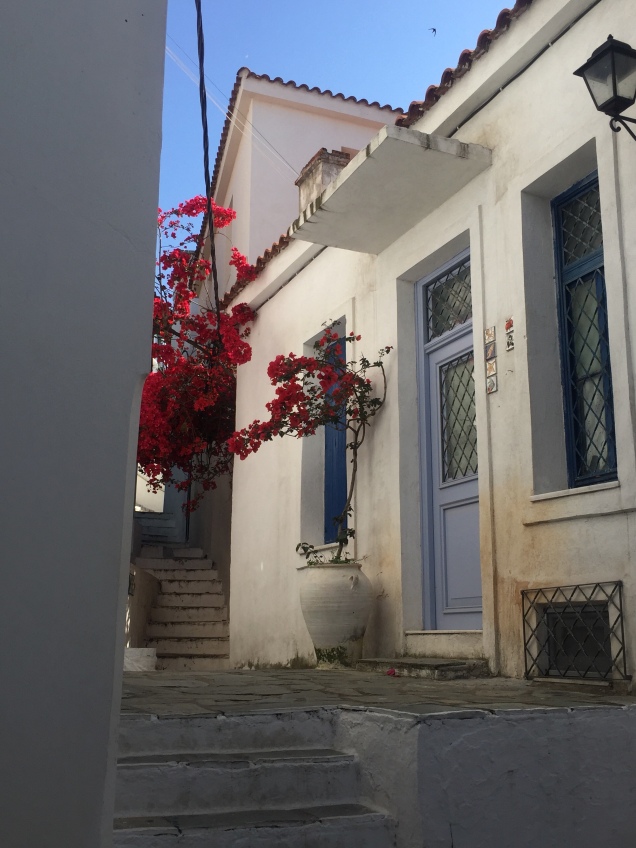 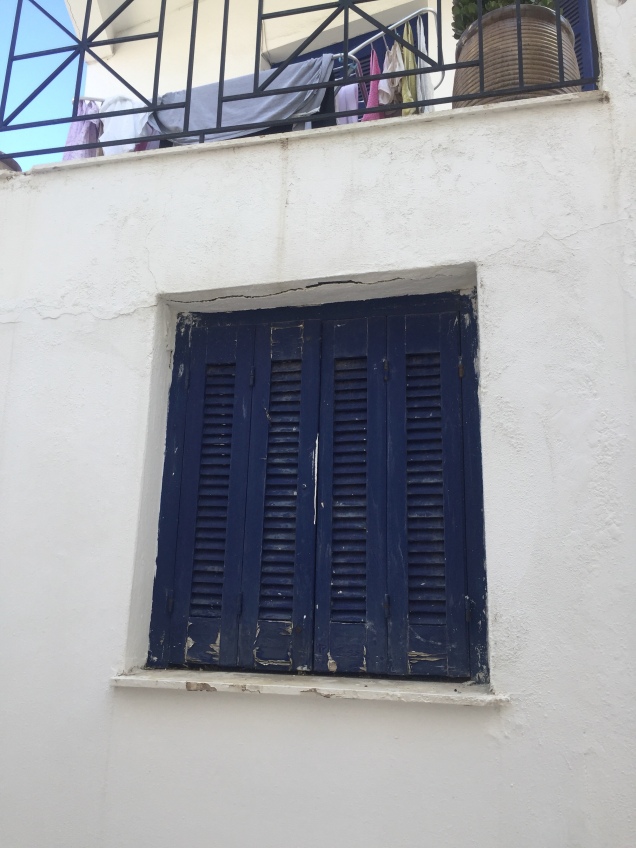 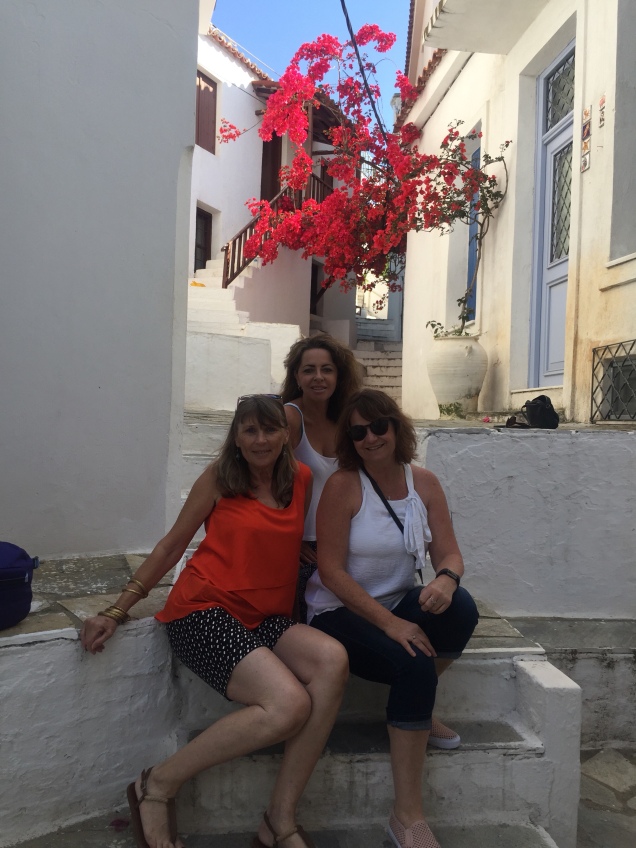 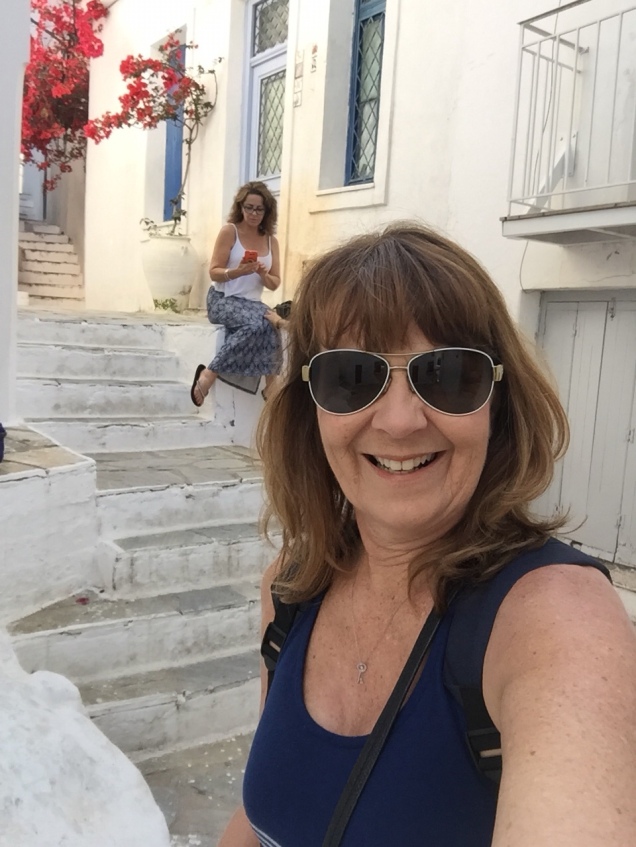 From our table, we could watch the ferry arrive and unload. The precision in moving all the truck trailers from the bowels of the boat was amazing…… very little space and big trucks with people everywhere !

This photo is the calm before the hive of activity. 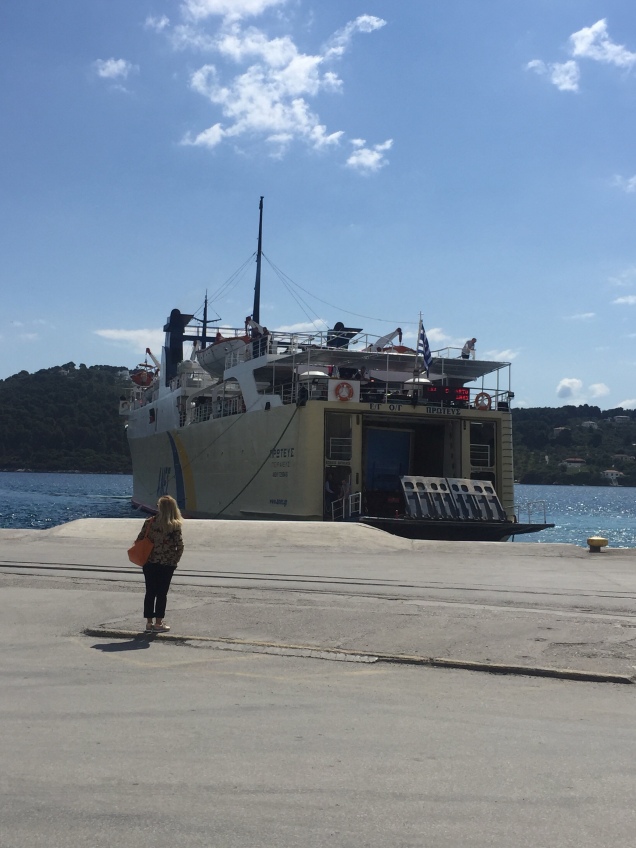 Our suitcases were taken from us as we boarded and once again, the friendliness of the people made us smile. The loader saw that we were 6 and when we arrived, he had all 6 cases lined up 😊 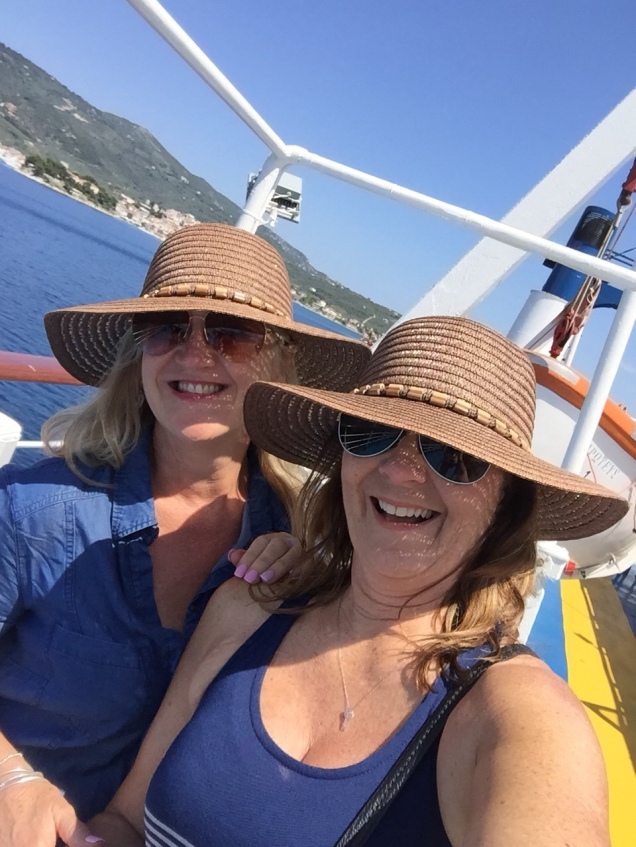 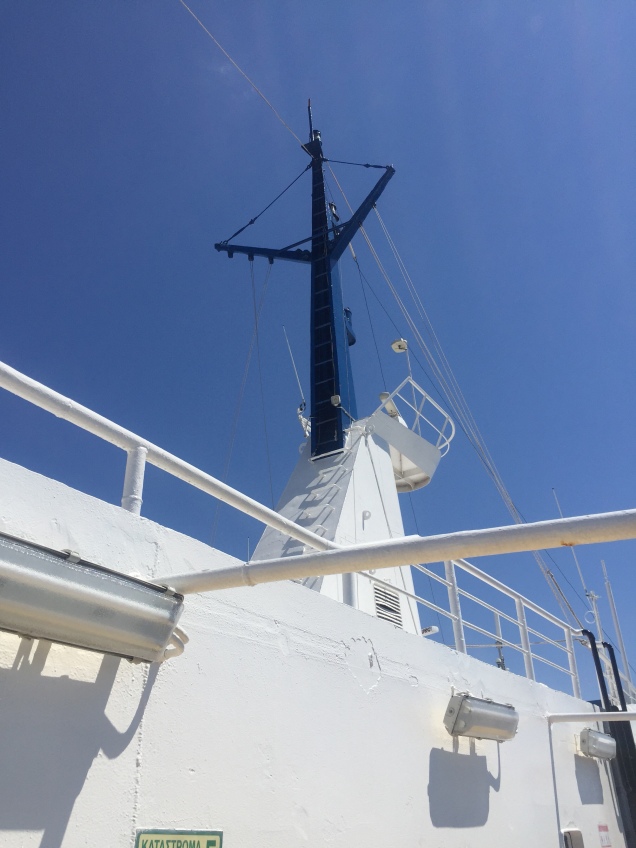 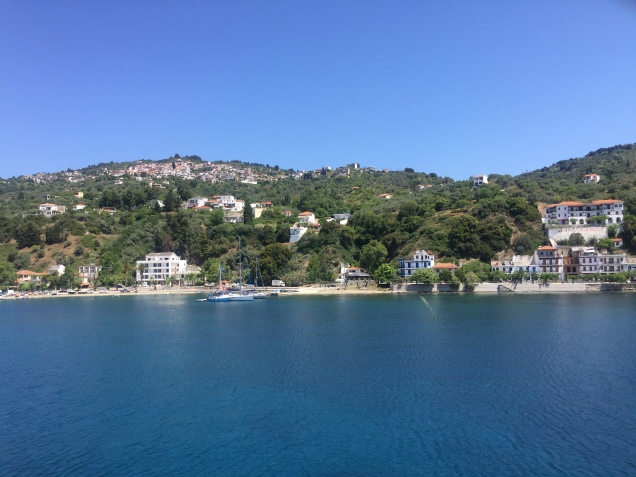 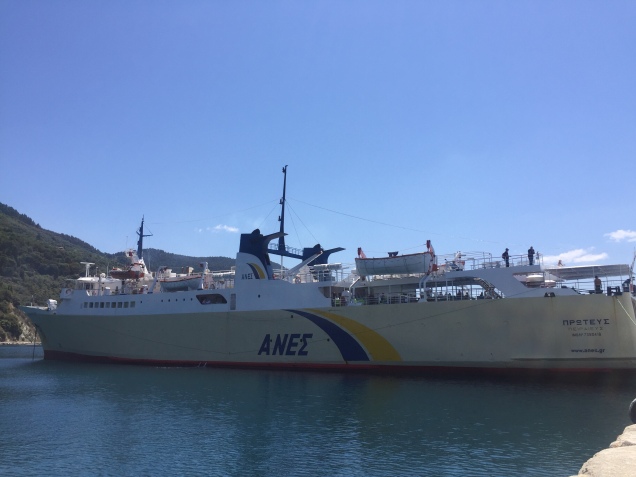 The trip to Skopelos didn’t take long. As we arrived at the port, we were amazed at the colour and clarity of the water, tourquoise and clear to the bottom.

We were met by the manager of the villa and had to be tag teamed up to the villa, in her car, as we were hardly packed lightly and there were 6 of us 😂 Eleni, a Greek Aussie, gave us a great insight into the island on the journey up the hill to Villa Pasifika. The roads up were narrow and often hairpin and we witnessed 2 trucks endeavouring to pass on a corner ……… wasn’t gonna happen…. one of the trucks had to back up and allow the other one through with us on his tail.

The villa is stunning and the views to die for. We had a wee shuffle of names and numbers in a hat and had our rooms allocated by camp mother. 5 rooms, 6 girls, you get the picture.

As soon as the bikinis were located in the cases, the girls were at pool. 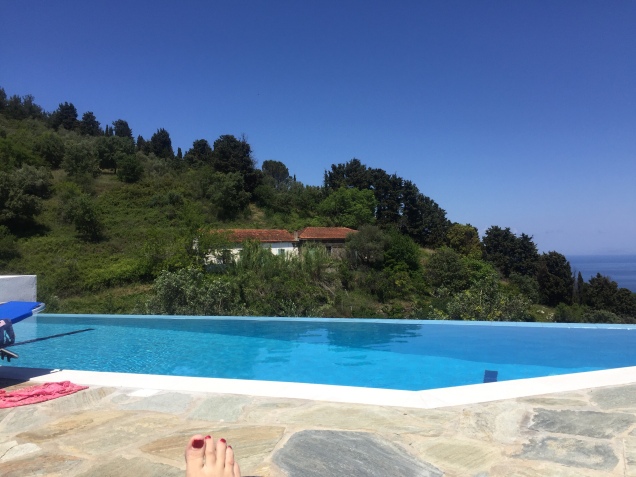 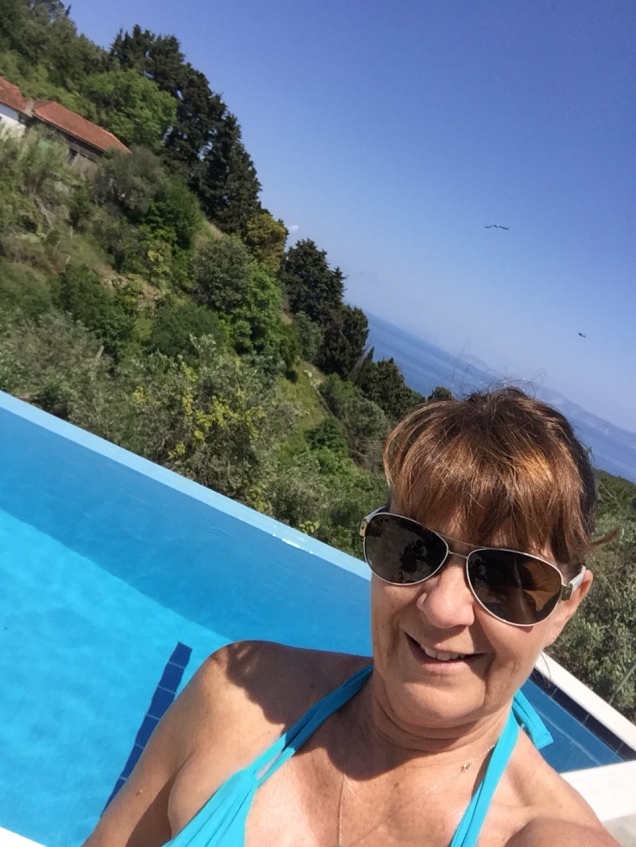 We had a wee drink by the pool, Cointreau on ice with a chocolate chaser, and the villa is christened. 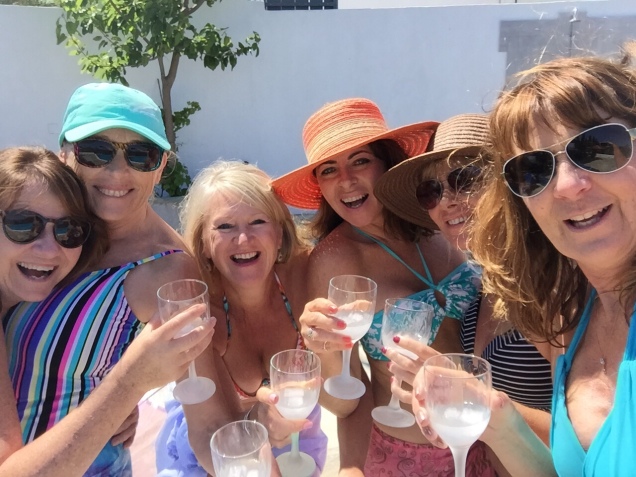 After a sunbath session, we decided to go for a wee reccy. For this we became mountain goats. Glossa is quite hilly, so we will have buns of steel in 8 days. We saw lots of quaint doors, cobbled alleys and friendly locals. The colours on the doors and windows are stunning. 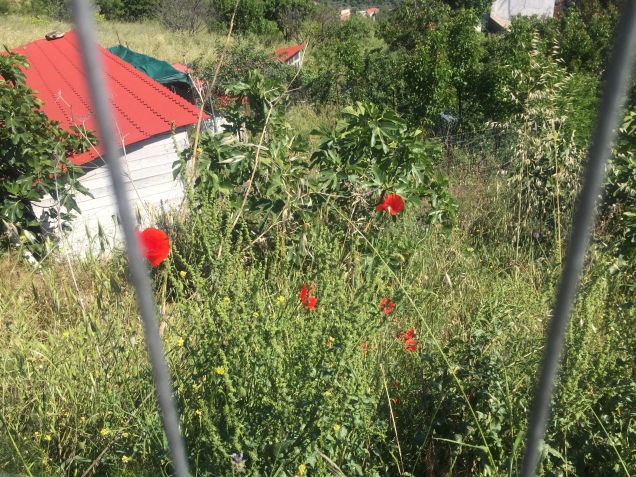 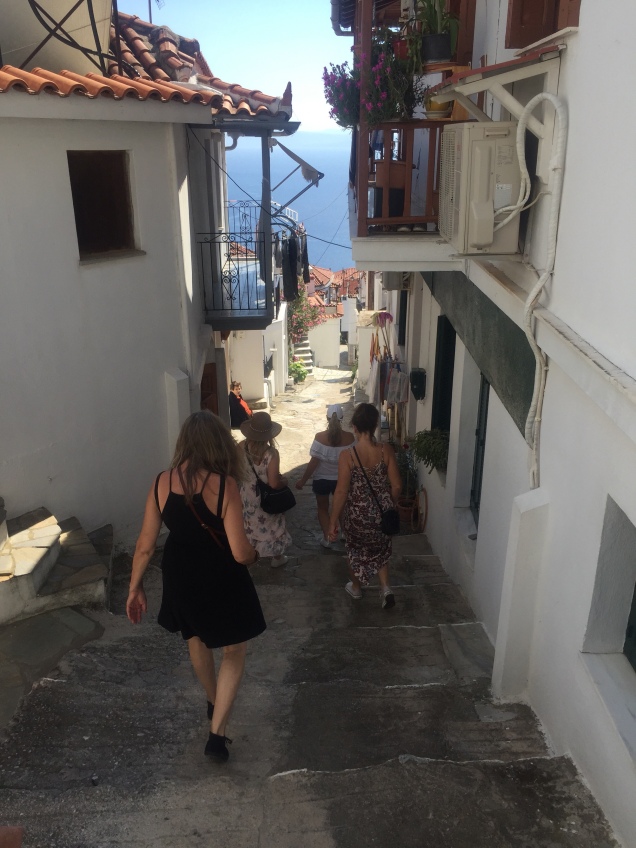 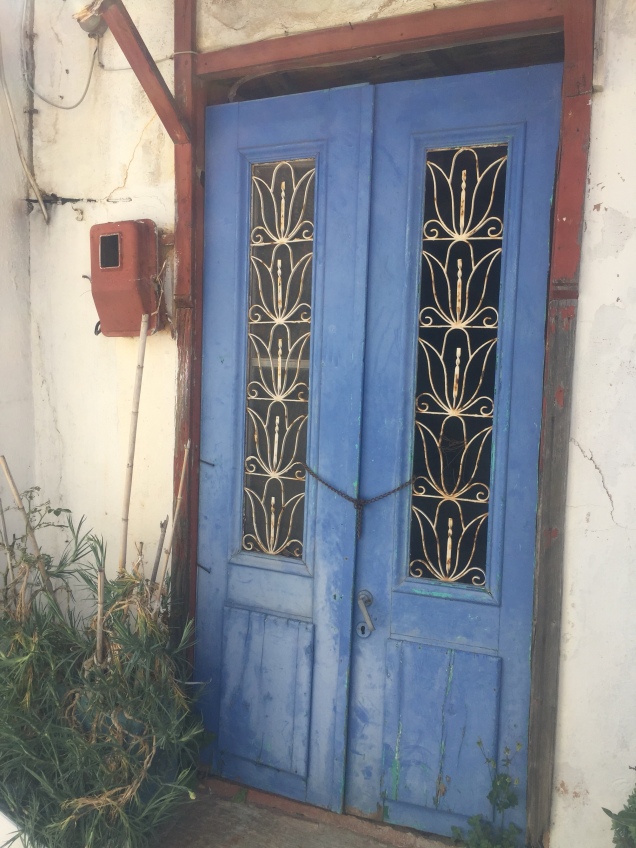 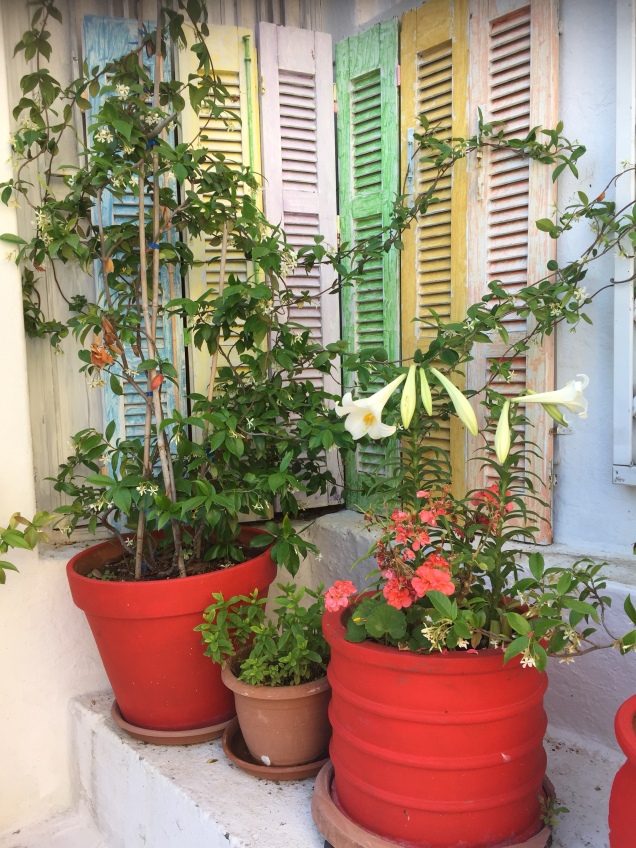 We stopped at the supermarket and loaded up the trolley, and enjoyed wandering the aisles looking at the choices and trying to guess what it was 😂 it’s all Greek to me.

The lovely grocery man, offered us free delivery and as we wandered back, it was hilarious as we saw the grocery assistant with all our groceries, hanging on a scooter 😂 pass us. Camp mother made us pizza for dinner which went down well with a Syrah. Talk about a bunch of nanas we were all still so jetlagged we were in bed early.