Where do I start ? What an amazing day. From the moment we stepped off the ship, walked across the crossing to San Francisco Square, we saw colour, classic cars and classic architecture. ❤️ 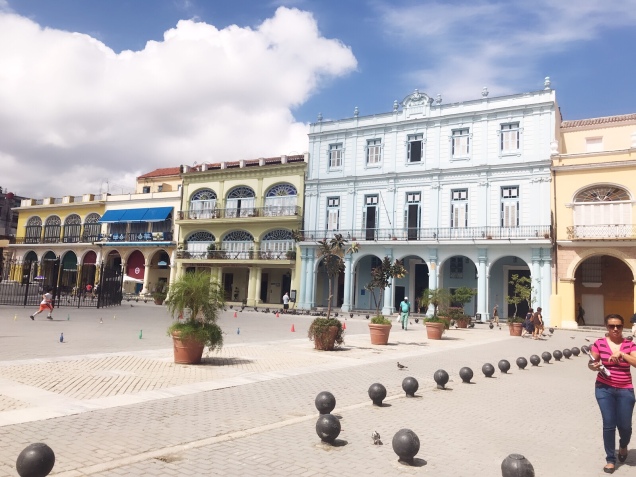 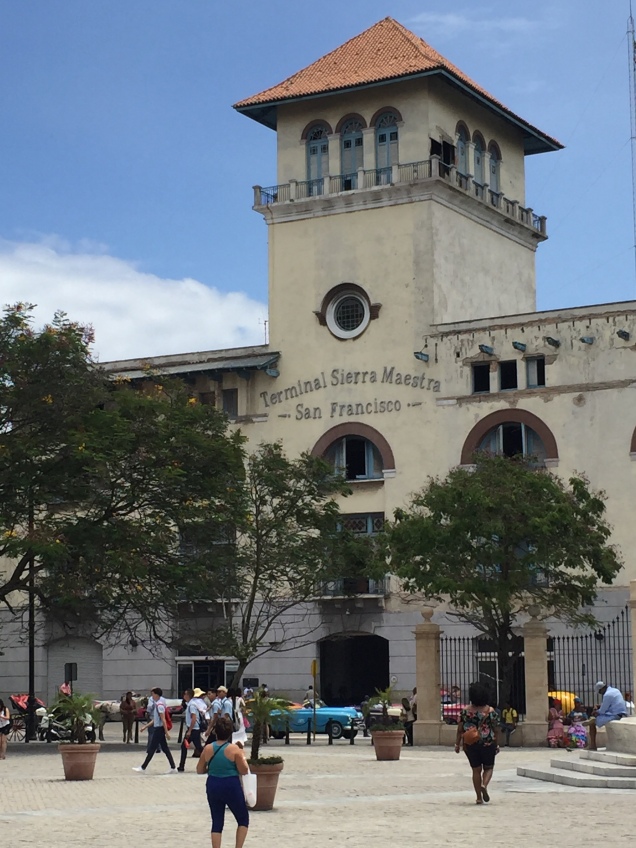 With a tour in a classic car booked for a couple hours later, we decided to wander.

First stop, a cafe in Plaza Vieja and the best Frappuccino I have ever had.

From a lovely outdoor and upstairs balcony we had a beautiful view of the square and a group of local school kids enjoying athletics day competitions. 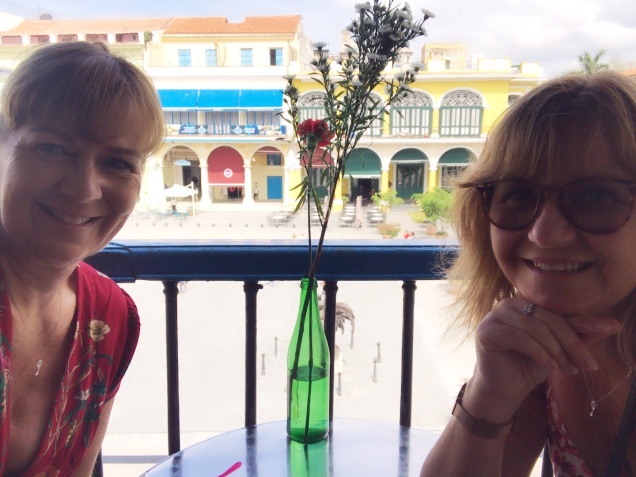 As we walked on towards a market area, we were chatted to, smiled at, told we were beautiful more times than ever before. Haha. Such beautiful people, friendliness on such a scale that I don’t think I have witnessed elsewhere. The locals love to chat, ask where you are from and chat some more. It was impossible to get from street corner to street corner without someone talking to you. 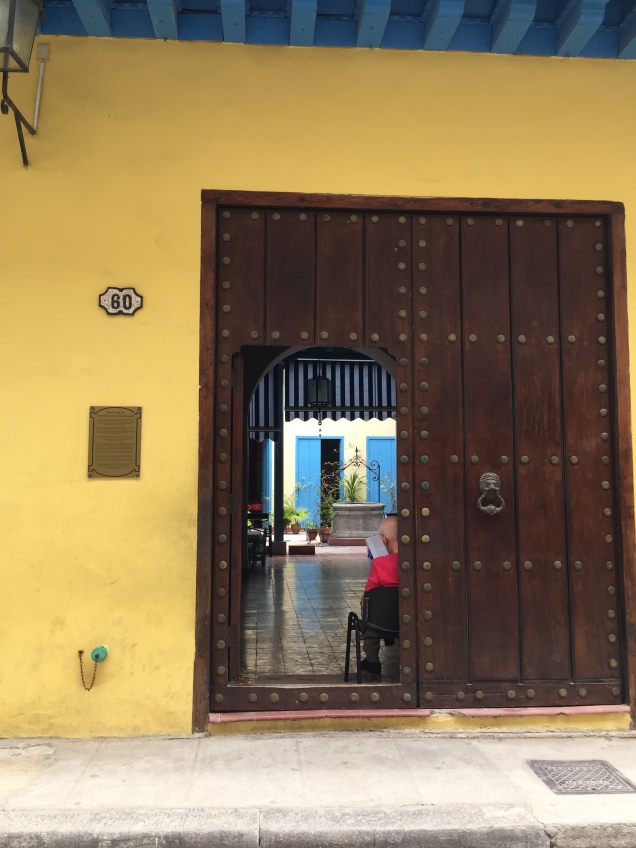 Most of the buildings are stunning and many are under renovation, aiming to be restored in time for the 500 year anniversary in November.

Others are painted in bright colours with even brighter doorways. I loved the big wooden doors with smaller openings within the door to look out, without opening the large door. Brilliant!

Classic cars in every colour catch your eye continuously. The drivers wave and offer their services and when you explain that you are booked elsewhere, or just say no thanks, they wave and say, have a good day. No pressure, no aggression, and no bad feelings.

The markets are in an old warehouse dockside, with a selection of art, souvenirs, t-shirts, bags, coffee mugs and much more. The art works are incredible and I now own a piece.

Leaving the market, we headed back towards Old Havana, wandering amongst the cobblestone streets again. We found a second hand book market with many amazing first edition books, Che Guevara being a popular subject.

Like many islands, there seems to be a large population of street cats and dogs, mostly they seemed healthy ish. They were not neutered though, so I guess the population will keep growing. A local told us that lots of people care for the street animals and in fact, later that night, we came across an elderly lady putting food out for the cats so I gave her some money. 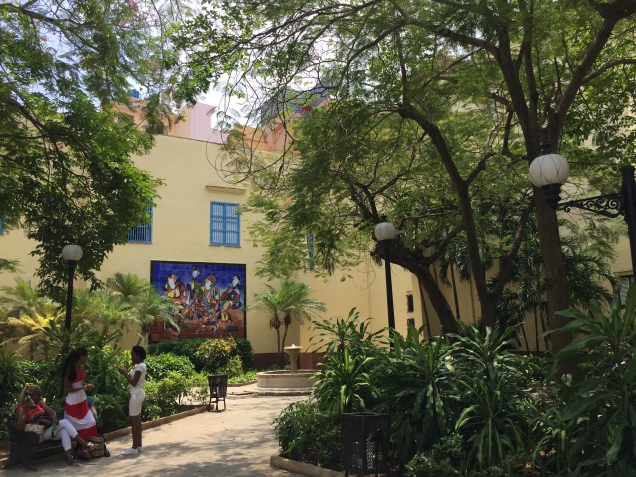 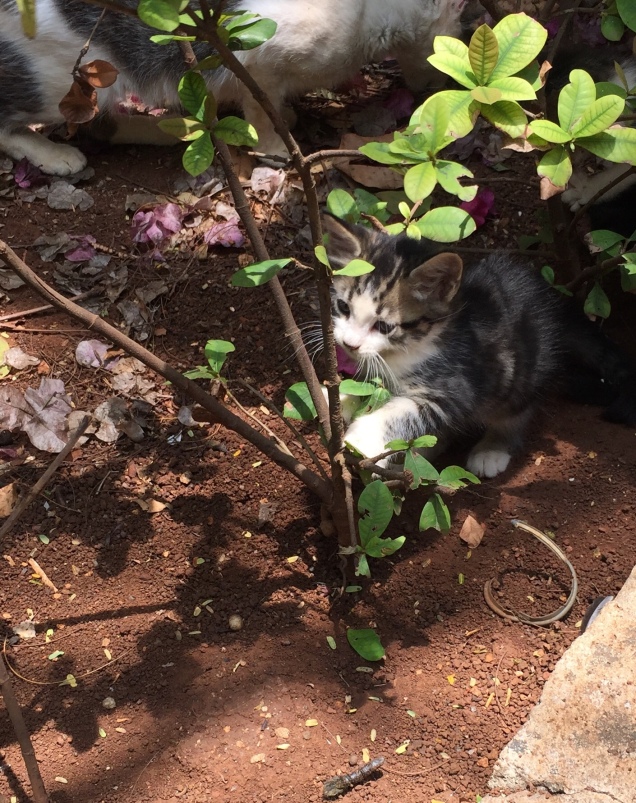 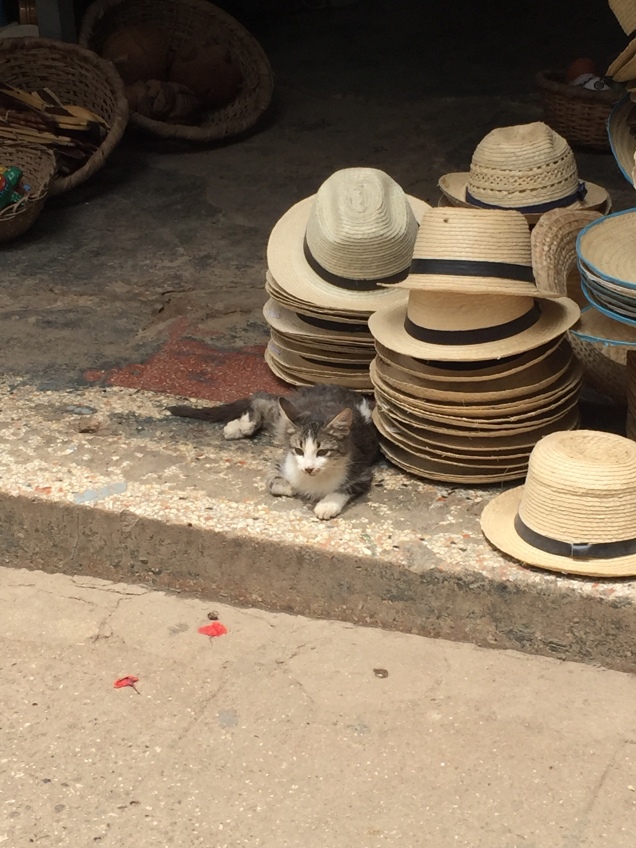 The tour in a 1954 Chevrolet, took us to New Havana, the 8 km Seawall, the Malecon, Revolution Square, where a million people once gathered, the embassy district and the Hotel Nacionale where many events, political and celebratory, in Cuba’s past took place. 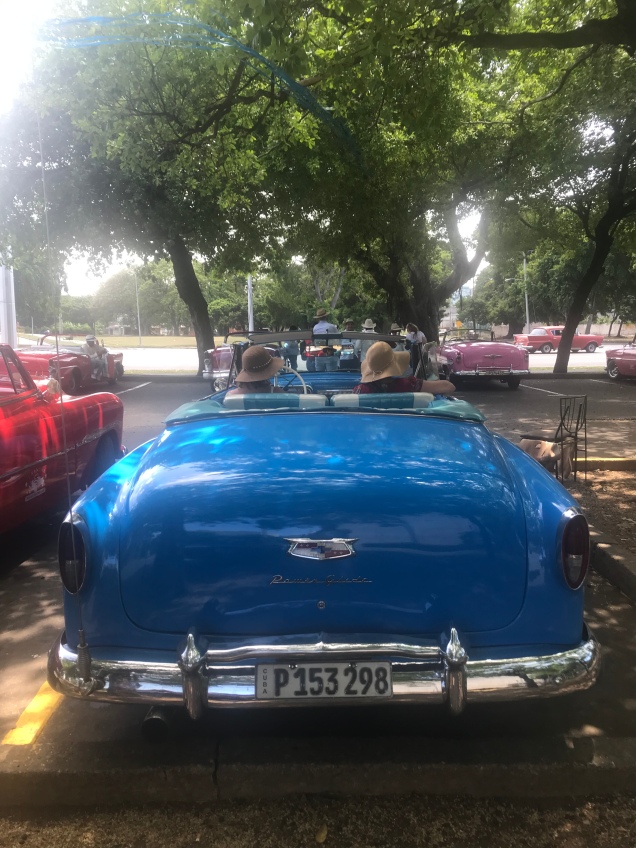 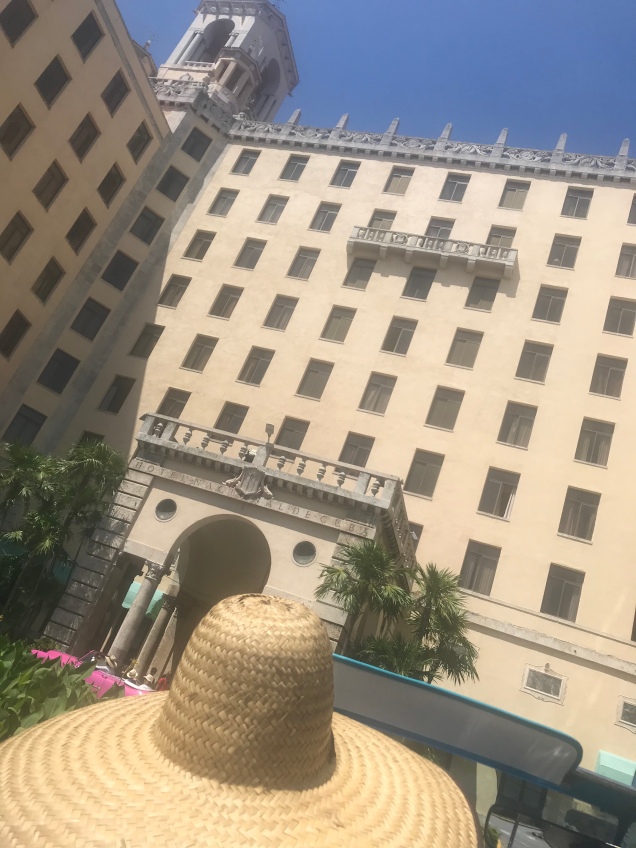 In a bar in this hotel, with photos of the many famous faces who have visited, we had a Mojito, with both light and dark rum. Very refreshing after a couple hours in a convertible, in the sun, seeing the sights. 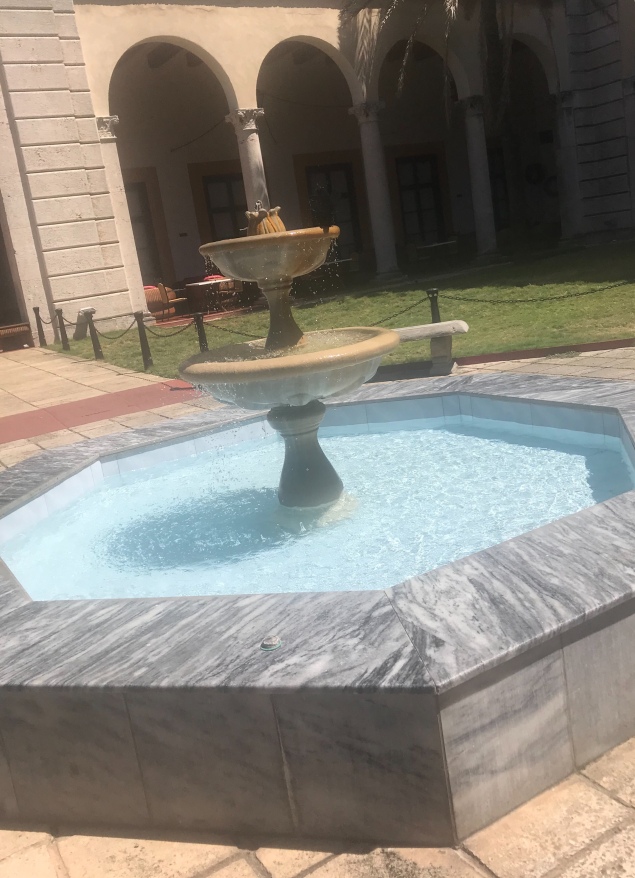 Leaving the car, back on foot, we headed to Floradita, Hemingway’s hangout. The place was very busy, full and lively. Live Music, people singing along and an air of fun.

We tried the Daquiri, and a lobster cocktail 😊 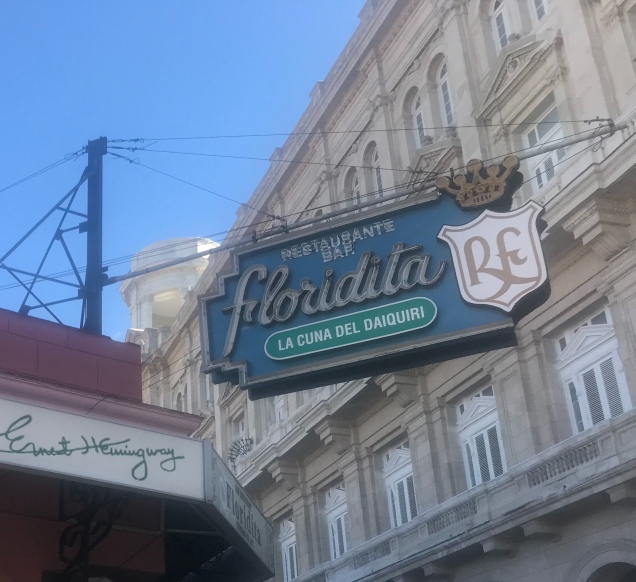 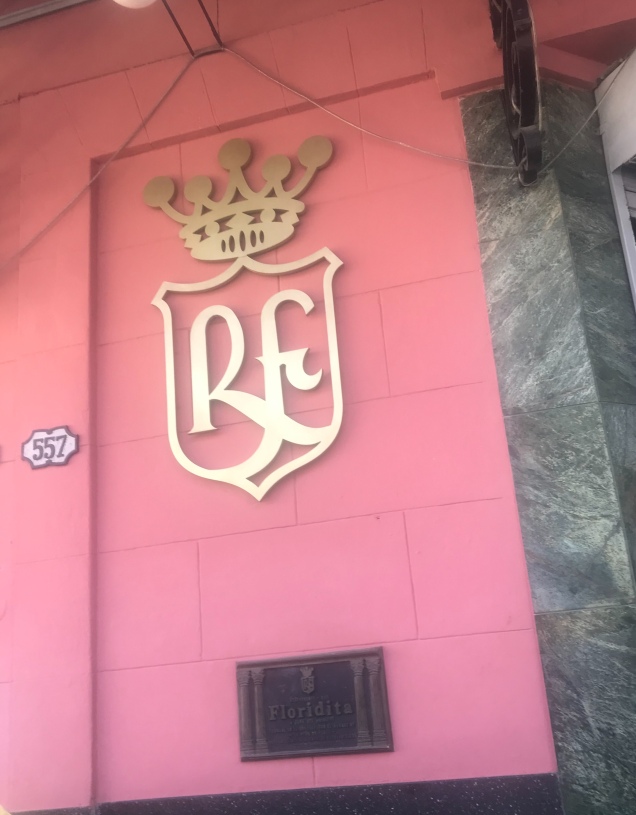 Another wander, this time down Obispo street and many more eating and drinking opportunities.

Wondering around Havana felt very safe even at 10pm, the locals all assuring us that it is very safe. Even at night, wandering around the cobbled streets, people chatted and smiled.